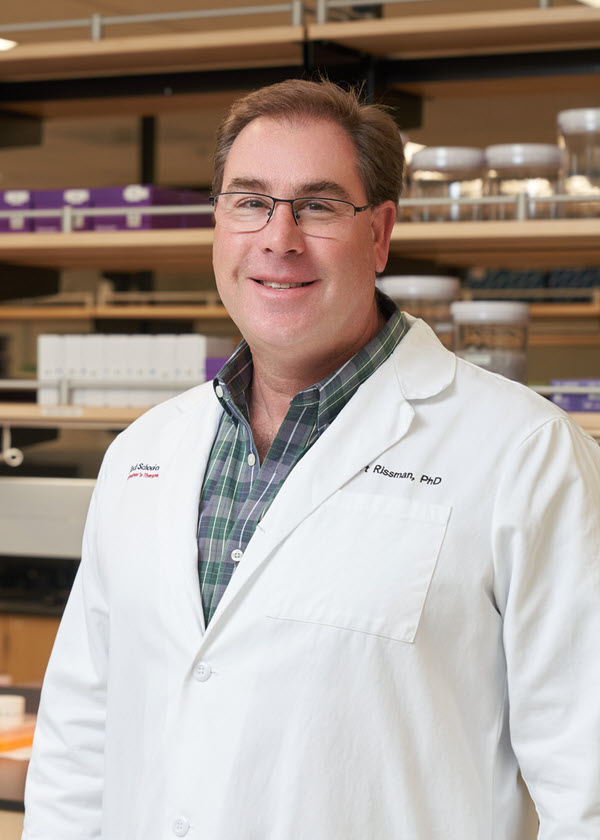 Dr. Rissman is the founding Director of the ATRI Biomarker Laboratory and Biorepository. He is the Alzheimer’s Clinical Trials Consortium (ACTC) Biorepository Unit Lead.

The ATRI facility is comprised by a wet laboratory and a large biorepository of -80 freezers to store specimens from clinical trials and longitudinal cohort studies. Using single analyte and multiplex bioassays, the goal of the lab is to identify biomarkers for preclinical AD and better understand how treatment parameters may impact these biomarkers. Concurrently with work at ATRI, Dr. Rissman is a PI at the VA San Diego, Professor of Neurosciences at UC San Diego and leads the ADCS Biomarker Core and ADRC Neuropathology Core.

The goal of Dr. Rissman’s basic science research is on novel biomarker discovery in Alzheimer’s Disease (AD) and preclinical studies in experimental. A major focus of his lab in AD biomarkers is on the utility and mechanistic underpinnings of neuronal exosomes and his group has published manuscripts demonstrating the ability of tau and abeta in neuronal exosomes to predict conversion from MCI to AD. The lab also investigates the contribution of stress and changes in stress signaling intermediates in Alzheimer’s disease neuropathology. Using transgenic mice and in vivo pharmacology, experiments are focused on identifying the role of corticotropin-releasing factor (CRF) receptors in beta-amyloid deposition, tau phosphorylation and behavioral and synaptic changes.